No wonder Barbie has the manual dexterity to be a veterinarian or surgeon – manipulating a wide barrel curling iron to produce the requisite loose curls is not as easy as it looks, especially on the back of your head. In fact, Barbie was late for work this morning due to the extra time required for makeup and changing pantyhose after a long nail snagged the first pair. Add that to the additional time it takes to make it to the bus stop in high heels and it is clear that another half hour will be needed to accomplish the morning transformation.

The humid weather today sucked most of the spring from my artificial locks so that by the time I caught a glance of myself passing by a store window my new hair resembled an ageing 80s rock star style or a mullet gone very wrong, as if there was ever such a thing as a mullet being right. WWBD – What would Barbie do? Perhaps I should be packing hairspray and a curling iron for the office and keeping a mini-makeup kit in my desk drawer. I’ll have to consult the experts.

Meanwhile, early reactions range from the very positive (“awesome” – “my husband thinks you look hot” – “long hair is always in style”) to the very negative. My daughter glared at me in obvious disgust when she first encountered her mother’s new look; I suppose I should consider this a tribute to my attempt to raise her as a strong, independent woman, valuing her own intelligence and personality, pursuing her career goals and eschewing the herd mentality. Her scornful comment: “It’s like you’ve turned into a woman from the 1950s”.

As for the reactions of strangers, perhaps it was only my attentiveness to my fellow subway passengers, but I am certain I noticed the glances of men remain on me for just a few seconds longer than before the transformation and the veil that comes from consciously avoiding eye contact seemed to lift momentarily while a flicker of appraisal flashed over me. Women, however, retained the usual impassive public facade.

A story one of my contemporaries had told me came to mind. She said she had gone to stand outside a restaurant to have a quick smoke recently and there were two men standing nearby, also smoking and engaged in conversation, when a couple of young women came out to the smoking area. The men smiled at them and one made some innocuous remark; soon the four of them were chatting companionably. 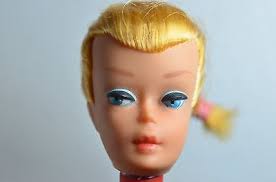 My friend said she was, for all intents and purposes, invisible to the group. I had noticed the same thing happening before the Barbie experiment – we had entered that no-man’s-land of women of a certain age that is literally a no-man’s-land. The evidence was starting to point to a cruel reality – women may have entered the 21st century but men are still stuck in the 1950s. Or perhaps it just boils down to the evolutionary imperative of reproductive mammals seeking out the nearest likely mate, based on broad outward signals such as red lips, swaying hips and a healthy head of hair, even if the previous owner of that hair lives half a world away.

Posted in Uncategorized. Bookmark the permalink.
← The Barbie Massacre
It’s a fine line between Trailer Trash and Barbie →